The US government goes as far as suggesting that in just another 10 to 15 years, nanotechnology will impact more than $1 trillion per year in products and services. 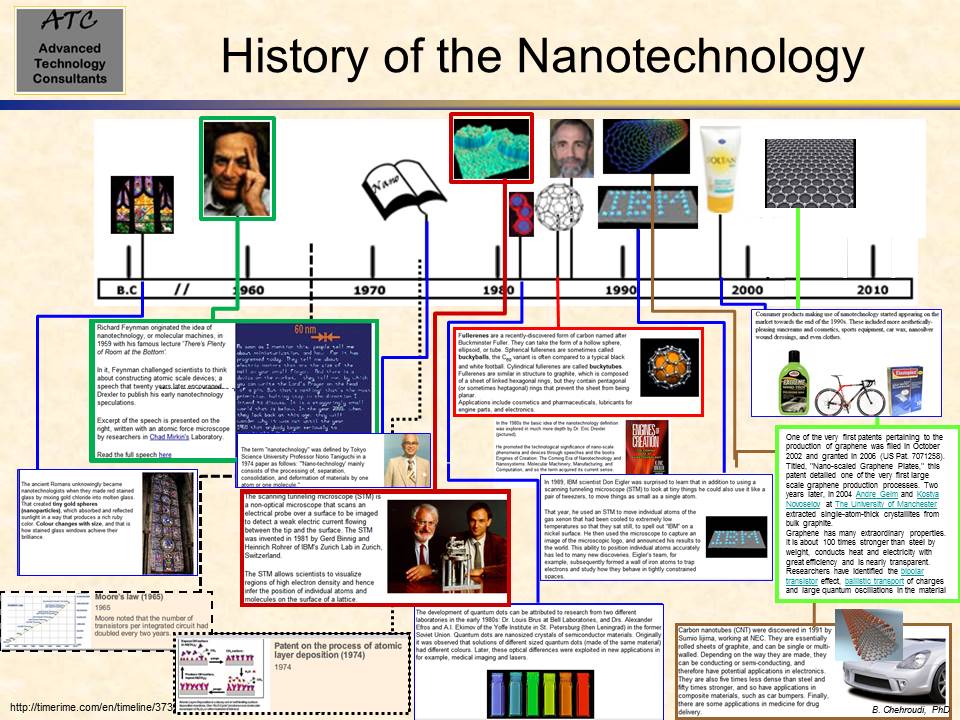 The idea of building and working with structures in the “nano”-scale world goes back to Nobel laureate Richard Feynman’s famous lecture on December 29th, 1959 at California Institute of Technology titled “There’s Plenty of Room at the Bottom.” He envisioned engineering materials one atom at a time, a “bottom-up” approach.

An entity with a micron in diameter is (1/1000) of a meter and a “nano” sized object is (1/1000) of a micron, a dimension difficult to imagine and feel. For example, a human hair is about 50 to 100 microns (mm) in diameter, a white blood cell is about 10 microns, and a DNA is in the order of 10 nanometers (nm). Building brick by brick using atoms required tools unavailable in 1959. One approach is to hope that once these building blocks are unloaded on a land, they automatically form a desired building through the magical self-assembly properties observed in molecular world.

One breakthrough enabling technology towards bottom-up approach was demonstrated by IBM researchers in 1982. Binning and Rohrer invented the scanning tunneling microscope (STM) and won the noble prize in 1986. The atomic force microscope (AFM) was shortly after invented by Binning and Rohrer as well. It is now widely accepted that scanning probe techniques, including AFM, constitute a key enabling tool for nanotechnology. Another key element in nanotechnology is chemical self-assembly, the self-organization of small molecular components to form complex functional structures. As the feature length scale reaches the 70 nm or less in lithography through implementation of tools such as F2 lasers, and the fact that biological scales are in the nano size ranges, the nanotechnology is seen to heavily interact/overlap with biotechnology and microelectronics.

James Canton, President of the Institute for Global Futures stated, "Never has such a comprehensive technology promised to change so much so fast... Inevitably, nanotechnology will give people more time, more value for less cost and provide for a higher quality of existence.” Also, based on a broad definition that considers most biotechnology the "wet side" of nanotechnology, Rice chemistry professor and Nobel Laureate Richard E. Smalley likes to say that "it holds the answer, to the extent there are answers, to most of our most pressing material needs in energy, health, communication, transportation, food, water, etc." Finally, The US government goes as far as suggesting that in just another 10 to 15 years, nanotechnology will impact more than $1 trillion per year in products and services.

This seminar attempts to instill a sense of understanding and appreciation for the significance of this revolutionary (nano-) technology of the 21st century, and elevate knowledge of the field for the technologists, managers, business people, entrepreneurs and the investment community. This is accomplished through dissemination of a balanced and high-fidelity information on scientific, existing and potential products, and business opportunities for the near-, intermediate- and long-term. This seminar aims to position the attendees to intelligently benefit from current and future nanotechnology products and other related opportunities in their technical and business activities.

Upon completing this course students should be able to: