THE accidental discovery that carbon nanotubes can be set alight with nothing more than a bright light could lead to a more efficient way of igniting car and rocket fuel.

Three years ago, a student working in Pulickel Ajayan's lab at Rensselaer Polytechnic Institute in New York inadvertently ignited the pile of carbon nanotubes he was photographing (New Scientist, 4 May 2002, p 27). Researchers think that the nanotubes ignite because they absorb light more efficiently than they can dissipate the energy as heat. The phenomenon only happens when iron impurities are present, although the exact process is uncertain.

Despite the mechanism's mystery, researchers are already beginning to exploit the effect. Bruce Chehroudi and Stephen Danczyk of the US Air Force Research Laboratory at Edwards air force base in California have found that nanotubes placed one millimetre away from a droplet of methanol or a liquid rocket fuel called RP-1 can ignite the droplet when flashed with light. They think the burning nanotubes ignite the vapour around the droplet, which then ignites the fuel.

The pair have also ignited solid firework propellants such as potassium chlorate, simply by placing the nanotubes on top of them. Encouraged by this success, they have filed patents on nanotube ignition systems for car and rocket fuels. Standard petrol engines rely on a spark produced by a high voltage between two electrodes at the tip of the spark plug. This ignites an atomised mixture of fuel and air in a combustion chamber, and the expanding gas drives a piston. But sparking does not burn all the fuel, creating inefficiency and pollution. The wasted fuel drips into the exhaust pipe, from where it is released into the atmosphere. And if rocket fuel fails to ignite, the mixture of oxygen and hydrogen can build up and ignite later in an explosion that can damage the rocket.

Nanotubes could prevent this by providing "distributed ignition" through the bulk of a fuel, with no single point of failure. The nanotubes would be blasted into the fuel as it is atomised, and mixed with the air inside the cylinder. A flash of light from a bright LED would ignite the nanotubes, and hundreds of tiny flames would then ignite the fuel throughout, doing away with the spark plug. "If one nanotube fails, you have lots of others," says Chehroudi. "Igniting at multiple points has always been a dream."

"A flash of light ignites the nanotubes, which then ignite the fuel throughout"

The ignition system would be more efficient because the nanotubes' dispersion throughout the fuel mixture means that the heat produced is used all at once to drive the piston, rather than gradually, so there is less heat loss. In addition, all the fuel would be burnt. This increased efficiency could justify the cost of the new engines that would be needed, says the team. The researchers are now trying to find which light wavelengths and intensities work best.  The idea is also being investigated as a more reliable wire-free way of setting off explosive bolts for rocket-stage separation, says Riad Manaa at the Lawrence Livermore National Laboratory in California. Wires often degrade and fail under high mission temperatures and pressures: an optical fiber might do the job better.

OTHER APPLICATIONS OF THE FLASH IGNITION OR PHOTO-THERMAL EFFECTS: NANOTUBE (FLASH) IGNITION 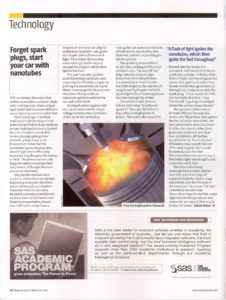 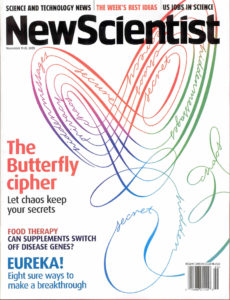