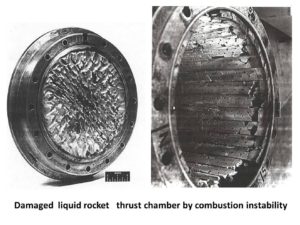 Acoustic combustion instability has been one of the most complex phenomena in liquid rocket engines, and therefore difficult to fully understand, control, and predict 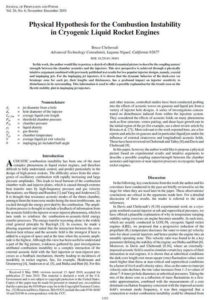 particularly in the design of high-power rockets. The difficulty arises from the emergence of oscillatory combustion with rapidly increasing and large pressure amplitudes. This leads to local burnout of the combustion chamber walls and injector plates which is caused through extreme heat-transfer rates by high-frequency pressure and gas velocity fluctuations, see Harrje and Reardon [1] and Yang and Anderson [2]. It is thought that resonance acoustic modes of the thrust chamber, amongst them the transverse modes being the most troublesome, are excited through the energy provided by the combustion. The amplification process is thought to include a feedback of information from the acoustic field to the injector or near-injector phenomena which in turn tends to reinforce the combustion-to-acoustic-field energy transfer processes.  The energy transfer reasoning alone is the widely cited general principle by Lord Rayleigh [3]. In essence, he made a phasing argument and  stated that the interaction between the combustion heat release and the acoustic field is the strongest if heat is added in a region of space and at the time when the acoustic amplitude is the highest. Although this view has been useful to understand a part of the big picture, evidences gathered by past investigations attributed combustion instability to a complex interaction of the external acoustic field with the fuel injection or near-injector processes as a feedback mechanism, thereby leading to incidences of instability in rocket engines. See, for example,  Heidemann and Groeneweg [4],  Anderson et al. [5 ] , and Hulka and Hutt [6 ].  For this and other reasons, controlled studies have been conducted probing into the effects of acoustic waves on gaseous and liquid jets from a variety of injector hole designs. A series of investigations concentrated on disturbances induced from within the injection system. They considered the effects of acoustic fields on many phenomena such as flow structure, vortex pairing, and shear layer growth rate in the initial region of the jet (for example, see a short review article by Kiwata, et al. [7]). More relevant to the work reported here, are a few reports and articles on gaseous and (in particular) liquid jets under the influence of external (transverse and longitudinal) acoustic fields. These have been reviewed in Chehroudi and Talley [8] and Davis and Chehroudi [10].

In this paper, however, the author would like to propose a physical picture based on experimental results and intuitive arguments to describe a possible coupling nature/strength between the chamber acoustics and injectors or near-injector processes in cryogenic liquid rocket engines.

In summary, an attempt has been made to portray a fluid dynamical perspective and link a hypothesis proposed here to observations made in cold flow injector studies, subscale fired engines, and full-scale production engines with an aim to offer a sketch of a theory being consistent with most observations pertaining to combustion instability. 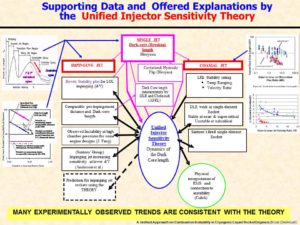 Based on the author’s previous work on intrinsic sensitivity of the dark-core length in a coaxial-jet-like injector in cold sub- and supercritical conditions, it is proposed that a similar phenomenon pertaining to the dark core in impinging-jet injectors is to be considered, attempting to offer underlying fluid mechanical reasons for the injector-caused combustion instabilities in LRE. The basic premise here is that when an important dynamic feature, such as the dark-core or breakup zone, of an injector design becomes sufficiently sensitive to thermofluid parameters of its environment, it is highly likely that this could strengthen the feedback link thought to be critical in the amplification process and hence push the system into an unstable operating state. Evidences cited suggest that the enhanced sensitivity of impinging-jet injectors to their environment occurs when the mean dark-core or break up length of one or both jets forming the impingement reaches a critical value, being of the same order as the pre-impingement length.  Feasibility of such a scenario is explored by comparing the range of pre-impingement length values for engines and some recently measured dark-core lengths for cryogenic jets at density ratios of interest.  It is then hypothesized that the stable-unstable transition boundary in the Hewitt stability plot is when the core length of  one or more of the jets of the impinging jet injector becomes comparable to the pre-impingement distance. This proposed hypothesis is able to offer a consistent explanation of why an engine design based on impinging jets becomes unstable when Hewitt stability parameter (dn/V) is decreased. While work is needed to make a transition from a hypothesis to an established fact, there is sufficient published information in favor of the hypothesis to make it a strong possibility amongst others previously proposed. Finally, the readers are cautioned that as some atomization results from cold studies are linked to fired sub- and full-scale engines, more targeted investigations guided by the hypothesis on the dynamic behavior of the dark-core length and width in cold and fired coaxial and impinging-jet injectors are justified and highly recommended.

Click on the slide below to see Dr. Chehroudi's presentation of the Unified Injector Sensitivity Theory at the 47th American Institute of Aeronautics and Astronautics (AIAA) Aerospace Sciences Meeting, Orlando, Florida, January 5-8, 2009. 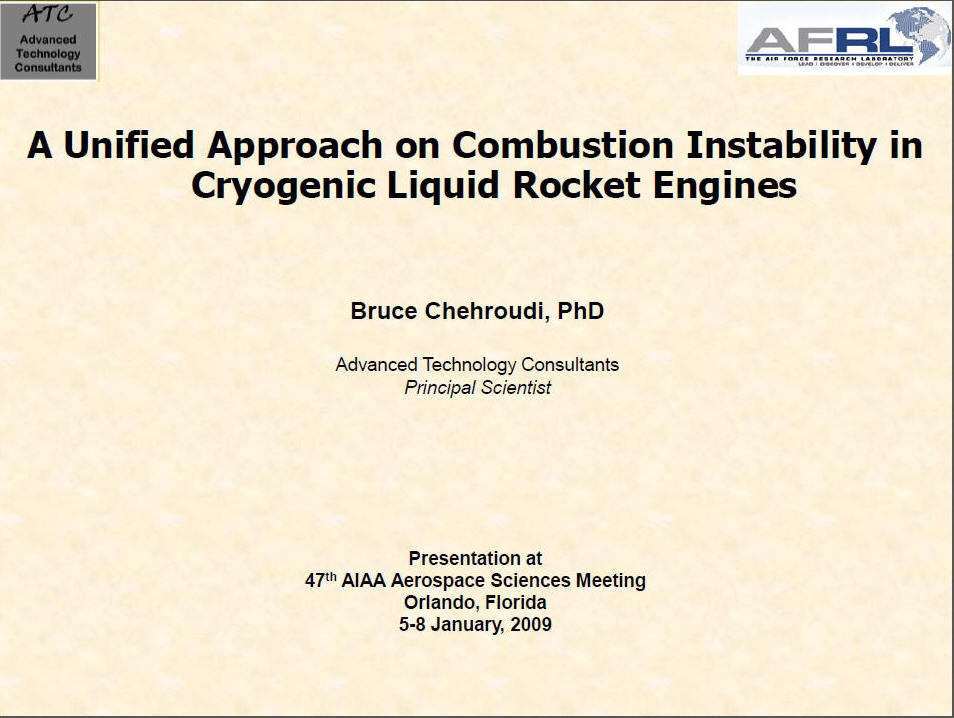