Advanced Technology  Consultants in collaboration with AFRL and Georgia Institute of Technology  has conducted this work.

Liquid rocket engines burn propellants, which undergo chemical reactions to convert the stored chemical energy into thermal energy. A liquid propellant can be an oxidizer (e.g., liquid oxygen), a fuel (e.g., kerosene or hydrogen), or a monopropellant (e.g., hydrogen peroxide or hydrazine). The latter can be thought of as a combination of a fuel and an oxidizer. 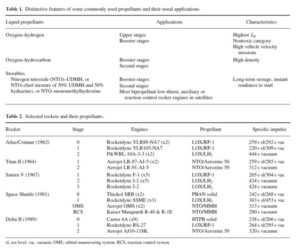 The selection of propellants demands a consideration of many factors. Some of them are discussed below. The final choice for a specific engine application is always a tradeoff depending on the circumstances and usage.

Cost and availability. Low cost and availability in large quantities are factors to be considered in the choice of the best propellant for liquid rocket engines. Production should not be complex and it is best that readily available chemical compounds and equipment are used. Nontoxic propellants are always preferred and less costly due to simpler safety, training, and operating requirements.

Physical properties. It is important to ensure that propellant physical properties (e.g., viscosity, vapor pressure, boiling point, freezing point, density, etc.) not only are within the required design guidelines, but also stay within allowable tolerances when stored or during operation.

Specific impulse and characteristic velocity. Important propulsive performance parameters, such as specific impulse and characteristic velocity should be considered. These parameters depend on the mixture ratio, chamber temperature, pressure ratio, specific heat, and molecular weight. For example, kerosene delivers a specific impulse considerably less than cryogenic fuels, but it is generally better than hypergolic propellants. Table 3 shows performance parameters for a host of propellant combinations. Generally, to attain high performance, the chemical energy content per unit mass of propellant should be as high as possible because this leads to high chamber temperature. At the same time, low molecular weight products contribute to performance and as such it is usually achieved via operation at a fuel rich condition. 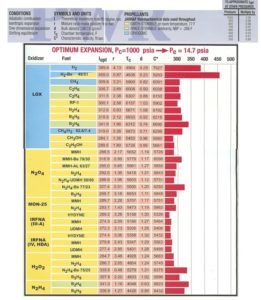 dvantage of denser propellants is that they require less storage space for a given amount of mass. Less storage space can have favorable consequences for a vehicle. For example, less structural mass may be needed for storage, which can reduce a vehicle’s weight. A smaller volume can also allow more options to optimally form the vehicle shape to reduce drag. This impacts the maximum flight velocity and flight range that can be achieved while in the Earth’s atmosphere. In certain performance comparisons, The density specific impulse, defined as the product of the specific gravity of the propellant mixture times the specific impulse, is often employed to evaluate the propellant performance according to the volume involved. For example, the specific impulse for hydrogen and oxygen expanding from 1000 psia to 14.7 psia in Table 3 is 389.4 seconds. However, these propellants take up considerable volume because of the relatively light weight of the hydrogen (even in liquid form). The weight of the structure needed to contain this volume somewhat offsets the advantage of the high specific impulse. From Table 3, the combined density is only 0.29 g/cm3, which in these units is the same as the specific gravity. Hence its density specific gravity is only 112.9 seconds. In contrast, while the specific impulse of the oxygen / RP-1 combination in Table 3 is 300.1 seconds, less than that of hydrogen and oxygen, its density specific gravity is 309.1 seconds, a larger number.

Heat Transfer. In a regenerative cooling system, a propellant is circulated through the hot cooling channels around the side walls of the thrust chamber. Therefore, the heat transfer characteristics of the propellant are an important design parameter. High thermal conductivity, high boiling point and decomposition temperature, high specific heat, and thermal stability are all desirable properties.

Ignition and combustion. There are two classes of propellant pairs: those that when mixed ignite spontaneously, called hypergolic, and those that require an external stimulus to start the burning process, called non-hypergolic. For small satellites, it is desirable to eliminate the ignition system by using hypergolic propellants. However, for many other engines a reliable ignition system is required. The ignition delay (determined by a combination of the propellant chemical properties and the manner in which the propellants are introduced into the combustion chamber) should be reasonably short to prevent unburned propellants from building up in the combustion chamber and then exploding. Certain pairs of propellants are considered to be more susceptible to combustion instabilities (see below), while others are not. Smoke from combustion can also be undesirable, for instance for reconnaissance in military applications, or because of deposit formation on important surrounding components and devices.

Saftey and environmental issues. Safety and environmental issues impose severe constraints on propellant handling, engine design, and operation. Obviously the impact of the combustion exhaust products on nearby communities must be assessed whenever engines are tested or a vehicle is launched. Personnel must be protected from exposure to the propellants themselves which might arise from possible mishaps, such as leakage, spillage, fire, fumes, explosion, etc. Infusion of propellants into the human body can occur through the skin, eyes, mouth, and lungs. The potential damage can be local, such as burns to the skin, or it can be more systemic. For example, hydrazine and its derivatives are carcinogenic. In United States, the Occupational Safety and Health Administration (OSHA) sets exposure threshold concentration and duration limits, and identifies health risks for most propellants.

One of the most severe hazards is spontaneous explosion. For example, hydrogen peroxide and nitromethane are unstable substances and can autoignite if heated inadvertently or when exposed to impurities. Organic compounds, for instance, constitute dangerous impurities for most oxidizers, such as hydrogen peroxide, nitrogen tetroxide, nitric acid, fluorine, and oxygen. Fuels and oxidants must be kept separated to prevent inadvertent mixing; there are standards governing separation distance vs. quantity. Most propellants must be stored in special tanks constructed of materials that resist corrosion or reaction with the propellants.

Materials compatibility. Many damage mechanisms exist between propellants and the materials used to handle them. These depend on each propellant-material combination. For example, low temperatures can cause the mechanical properties of many materials to change considerably, notably making them more brittle and reducing their stress limits. These must be taken into consideration when handling cryogenic propellants. Another example is the way hydrazine reacts with many materials. Compatible materials are certain types of stainless steel and aluminum as well as nickel. However, iron, copper (and its alloys such as brass and bronze), monel, magnesium, zinc, and even certain types of aluminum alloy must be avoided.